Below are several features and opportunities within U.S. farming that may be targets for improvement.

The U.S. is the world’s largest agricultural exporter. However, in 2020 there was a deficit as more foods were imported. Data from the USITC [1] shows that our trading partner mix is evolving.

Biofuels, specifically “first generation” [2] materials, are an attempt to establish a renewable energy source. In the U.S. this is typically using corn and soybean crops.

However, biofuel crops contribute significantly to deforestation, over-fertilization, heavy subsidization, and take more energy to produce than they generate [3].

In the U.S., approximately 35% and 40% of corn and soybean crops respectively are dedicated to producing biofuels. 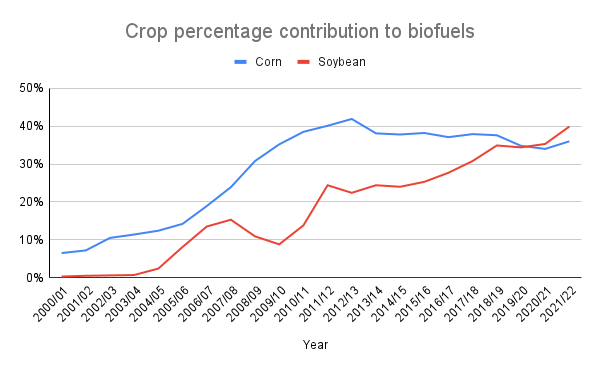 Takeaway: any reduction in biofuel production would contribute to increased food output.

There’s been an ongoing trend of consolidating acreage into fewer farms in the U.S [5].

As of 2021, there are approximately 2.01 million farms which produced a total of $510 billion gross cash farm income (GCFI). Using the values in the chart above, the most efficient value of production percentage to farms percentage is in the $5 million or more GCFI class. Assuming the smaller classes could be brought up to the same efficiency, or further consolidated, an additional $1.12 trillion GCFI could be produced.

These are rough numbers using data from different periods but they illustrate a potential total addressable market for productivity improvement.

Larger farms benefit from economies of scale and may also own fewer assets. According to USDA 2020 data, farms with greater than $5 million GCFI hold approximately 0.3% of all farm assets.

This may be due to the use of custom applicator and custom harvester companies that own heavy equipment and are hired by farm owners when needed. 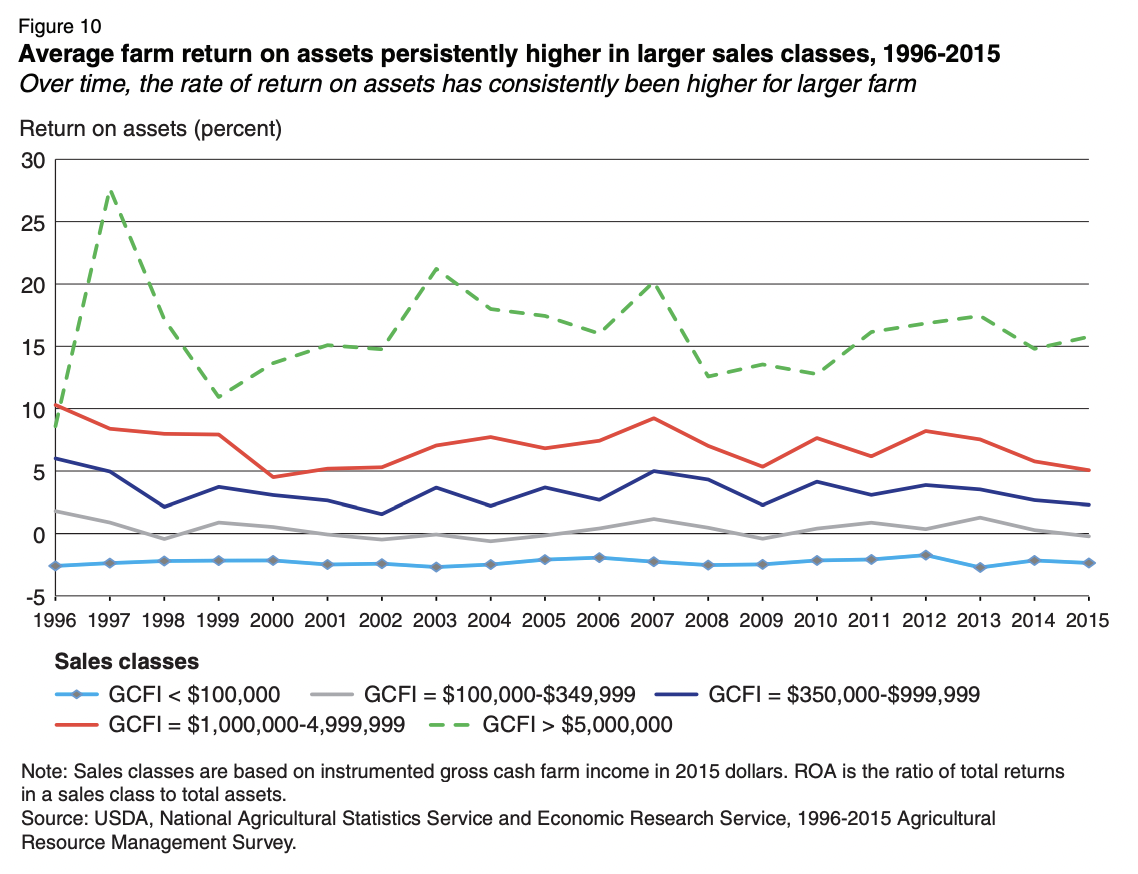 A 2014 USDA report [6] indicates that there were approximately 294k small acreage farms which are farms with 10 or fewer acres.

Out of this, the vast majority produced less than $10k GCFI while approximately 46k had gross sales between $10k and $500k, primarily in niche crop production.

Additionally, approximately 3,600 produced more than $500k, mostly by focusing on specific segments of livestock lifecycles, like breeding and farrowing.

Total factor productivity (TFP) is a USDA measurement for evaluating farming productivity that accounts for all inputs and outputs.

In the U.S., TFP has generally increased year-over-year, rising an average of 1.49% per year from 1948 to 2011. The 5-year rolling average does indicate a leveling out in recent years and there is some expectation of a slowdown by 2050 [7]. 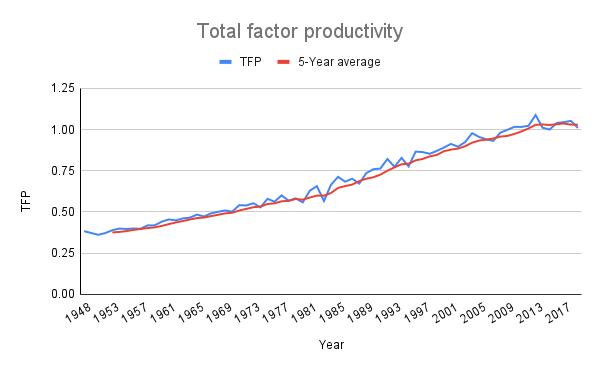 Globally, the world needs to maintain a 1.73% growth to sustain 2050 population estimates.

Takeaway: TFP should be used to evaluate implemented solutions and progress.

In general, farm subsidies create market distortions and do little to increase production. [8]

Most payments go to larger farms and bypass smaller farms that would theoretically be the target beneficiaries of such a program.

Lastly, they encourage specific crop production which disincentivizes sustainable practices like crop rotation and leads to over-fertilization and soil degradation.

There has been a consistent decline in farming labor which negatively impacts TFP. [9] Fewer individuals are seeking out farming positions at a rate that’s outpacing automation’s ability to replace them.

These are a handful of notable features of U.S. farming that are likely targets for disruption.

The sector has many inefficiencies and fragments that would benefit from innovation. And in doing so, builders here would be positioning the U.S. for agricultural dominance and to potentially become the “world’s bread basket.”

A mission that is both a strategic and moral good.